In the lawsuit between Apple and Epic, documents have been released showing what Epic pays for giving away free games. In a period of 9 months, this amounted to about 11.7 million dollars. It also appears that Epic had about 14 billion dollars in turnover in three years.

Between December 14, 2018 and September 26, 2019, Epic gave away 38 games for free through the Epic Game Store, paying approximately $ 11.7 million to developers. The games were claimed a total of 105 million times and it brought Epic about 4.9 million new users. This brings the ‘cost per acquisition’ to $ 2.37 per user.

The numbers are in court documents released in the lawsuit between Apple and Epic. That was noticed by the creator of the newsletter GameDiscoverCo . Epic usually paid several hundred thousand dollars to developers, with outliers being Batman: Arkham, Subnautica and Mutant Year Zero, for which Epic paid $ 1.5, 1.4 and 1 million respectively. Epic paid the least for now over ten-year-old indie game Super Meat Boy: $ 50,000.

All free games have been claimed at least a million times. Batman: Arkham was the most popular, having been claimed 6.5 million times. It is striking that Epic paid nothing for giving away Metro: 2033 Redux, while that game was downloaded 4.5 million times. This may have been an agreement of a larger deal, for example around Metro Exodus, a game that was exclusively in the Epic Games Store for a year.

There are no figures available for games after September 2019. As a result, it is not clear what Epic paid for giving away Grand Theft Auto V in May last year and how many users that resulted. Supposedly, that was Epic’s biggest giveaway to date. This was evident from the pressure surrounding the release of the game and the increase in the number of active users .

The documents also detail the exclusivity deal between Epic and Take-Two over Borderlands 3. Epic paid $ 115 million for that. Of that amount, $ 80 million was a “sales guarantee.” In the first two weeks after the release, that amount was almost fully achieved.

Another document shows that exclusive games affect the sales of the Epic Game Store. When an exclusive game appears, the daily turnover increases. In 2019, Borderlands 3’s release saw the biggest peak. 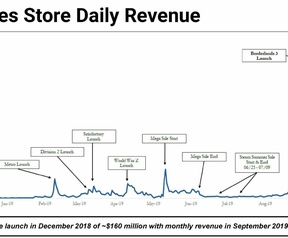 Fortnite accounts for about $ 14 billion in revenue

The lawsuit also details Epic’s earnings from Fortnite. The company showed figures for 2018 and 2019, showing that Fortnite generated sales of 5.5 and 3.7 billion dollars in the first two years after its release. That equates to $ 9.2 billion in two years.

License revenue for the Unreal Engine and Epic Game Store is many times lower, as Epic’s total revenue for the same period was $ 9.8 billion. There are no detailed figures for 2020, but Epic CEO Tim Sweeney said during the lawsuit that the company had sales of 5.1 billion dollars in that year. Assuming this is again largely due to Fortnite, total revenue from the game so far comes in at around $ 14 billion.

Epic vs Apple – Lawsuit over commission

On Monday the lawsuit between Epic and Apple started in the United States. The case revolves around handing over some of the income from in-game purchases. Apple charges a 30 percent commission from major developers like Epic, but the Fortnite maker disagrees. The case started when Epic introduced its own payment system in the iOS version of Fortnite, bypassing the remittance to Apple. Apple then removed the game from the App Store.

The lawsuit will run for three weeks, but regardless of the outcome, it is likely that it will be challenged by the aggrieved party. The case will therefore probably last much longer. In fact, the case is not just about Fortnite and the App Store, but about the general revenue model of download stores that charge 30 percent commission. There has been a lot of discussion about this for a number of years.

Microsoft recently lowered its commission for PC games in the Microsoft Store on Windows 10 to 12 percent. For Xbox games, that is still 30 percent. Apple lowered the commission for small developers to 15 percent late last year , but developers who earn more than a million dollars a year continue to pay 30 percent.

The lawsuit, partly in court and partly through dial-up connections, started off boisterous. Initially, the court was unable to mute the public line. About two hundred interested people had called in and made themselves heard with slogans such as ‘bring Fornite back to mobile’ and ‘free Fornite’. Only after twenty minutes was the line muted.