NASA has delayed the launch of the James Webb Space Telescope for another four days. The short delay is due to a problem loading the telescope into the rocket. 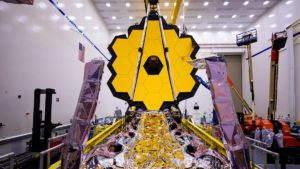 The space telescope will not go into the sky until December 22 at the earliest , NASA writes . That’s four days later than the previous launch date. In September , the space agency postponed the launch until December 18 . The new delay is due to “an incident” during launch preparation. NASA says it needs more time for additional checks.

The incident occurred, according to NASA, when the space telescope was installed in the hardware that will be integrated into the final stage of the Ariane 5 rocket. During loading, a clamp came loose that was supposed to hold the telescope in place. It hit the telescope and caused ‘a vibration through the telescope’.

NASA says it needs more time to investigate whether that vibration caused any potential problems in the rocket. For example, components may be damaged. The space agency says it will provide an update at the end of the week when the tests are completed.